A Time of Justice by Katherine Kerr

I am sold on Joscelin's ability to fight though.
We meet Waldemar Selig, the Skaldi who aims to unite all Skaldis and conquer Terre d’Ange.• What do you think of Selig? Were you impressed?• How did the way he was introduced in the story affect your impression of him when he does show up (first rumors mentioned every now and then of Skaldi joining forces under one dude; rumors of Skaldi movements indicating they have a leader; Phédre hearing stories of mythical proportions about the Skaldi leader; Phédre hearing his voice and peeking at him between tall Skaldi men; and finally seeing the dude and realizing he’s a tricksy one)? Did it increase your anticipation and curiosity about him?
Impressed enough I guess. He's not a paer tiger. But not impressed like I am with Delaunay or Melisande. He has the scent of the stock character to him.
There are lots of other stuff I didn’t mention, so share your thoughts on them too (all the politics, Hyacinthe, predictions fulfilled, etc.).
Ah Hyacinthe! Bless your foolish heart for thinking all that had to happen was your obstacles with Phédre disappearing and all would be well. Do you think she liked your high-handed assumptions, your placement of your culture's traditions above your relationship? Well not today me old petal.
I do want to say something about Delaunay. I knew, of course. But I didn't know the first time. I think it was a very masterful piece of plotting by Carey that.
I think on this read-through, I came across what I'd call a single defining trait of Anafiel Delaunay, his strength and weakness - his single-mindedness. He shows as this almost mythical figure, excellent in all disciplines, multi-layered and faceted, but at the core Anafiel follows one scent and is peerless in pursuit of that scent, but a little clueless outside of it. He has been marvellously clever and fantastically devoted in his oath to his long-lost love, but didn't pay enough attention to things he thought outside of it. Look at how he misjudged the feelings and emotions of Alcuin and Phédre. Look at how he misjudged Melisande, thinking her outside of his hunt. It seems a bit ridiculous with everything we know about her after the fact - her ruthlessness, her ability to deceive, her interest in the throne - but there we go.
If he reminds me of another fantasy character, it is - and recent events make me wish I could think of a better one - it is Dumbledore. Both are presented initially as wise beyond wise, superbly talented, incredibly interesting. As the story progresses, we see the human failings behind their talents, not to mention the questions arising from the heavy burdens placed on the very young. It's not unknown for readers to focus on the latter but personally I see a blend; his imperfections are not the entirety of his story for me. After all, even clever people make mistakes. I look at Anafiel Delaunay and I see a character who, by and large, tried to treat people with respect and honour. He asked nothing from Alcuin or Phédre that went beyond D'Angeline cultural boundaries. He put them in danger, but they lived in dangerous times - who knows who dies if the Lioness of Azalle and Melisande are left to play their games undisturbed? Ultimately, I still like him.
Posted by Peat at 05:11 8 comments:

Onto book three of my Redwall readthrough with Mattimeo, the direct sequel to Redwall itself.

"I do not like the term 'fantasy'. It smacks of swords and sorcery and dungeons and dragons, and this is not at all the feeling of my books. I like to think of my books as old fashioned adventures that happened 'Once upon a time, long ago and far away...'; in fact, good yarns is how I describe them." (Undated Random House interview)

a) The snobbishness - "Ooh, fantasy's this thing, I don't like this thing, I'm not fantasy". Give over. If nothing else apart, if someone sticks a label on you, maybe think about what it really is, not what it "smacks of". Want to know how many old fashioned adventures and good yarns are in the fantasy genre?

b) The lack of gratitude - I'm imagining a lot of Redwall fans found their way to the series thanks to fantasy. I'm imagining publishers and booksellers took it on because they knew books like Lord of the Rings and Watership Down had established a market for books like this. Jacques sailed down a high tide that came from others' efforts - not taking away anything from his skill, 99% of good authors are in this boat and 99% of would be authors never make it to that boat - and those efforts were in the fantasy genre.

c) The lack of self-awareness - The most important single physical artefact in the series is, in fact, a sword. Creatures claiming or having supernatural powers are far from unknown - Mattimeo has Ironbeak's seer Mangiz, Slagar faking magic powers, and evidence of prophetic visions from Germaine; Mossflower has Boar's knowledge of his own fate; Redwall has the spirit of Martin the Warrior. Both Redwall and Mattimeo feature quests underground, and in Redwall, Matthias fights a giant poisonous snake i.e. a dragon. Everything Jacques says fantasy smacks of he has! He has in abundance! His books feel like fantasy by his own definition and that he didn't get that is just bemusing.

How people view the fantasy genre doesn't bother me that much; I have no huge need for it to be popular or respected, as long as there's a core who love it that I can find. The only real reason to wish for the genre's popularity is so that those involved got paid fairly, and if we dream of getting so popular we all get paid very well, I'd worry that the pay of our collective dreams would warp the creativity behind it. But insofar as it bothers me, and insofar as it bothers people I'd wish to be unbothered, statements like Jacques are irksome and unhelpful.
The bit that really bothers me is the complete lack of self awareness verging on hypocrisy. Swap out the mice, otters, rats, cats, foxes and snakes for hobbits, dwarves, orcs, elves, goblins and dragons and you have some of the most stereotypical fantasy the world has ever seen - so stereotypical it's actually rare. Obviously it's a big swap but one big swap doesn't take you out of a genre. Not fantasy because its old fashioned adventure? We built this city on old fashioned adventure.
Jacques' work couldn't be more fantasy if he'd tried and if he'd spent less time being snobbish about the label and more time understanding the company he'd been placed in, he'd have probably understood. Maybe.
Anyway, sermon over. Tune in soon for the next installment - Mariel of Redwall, featuring our angriest protagonist yet.
Posted by Peat at 05:49 4 comments:

Well, book one is in the bag, which means we're now onto book two of the Redwall series readthrough (and where it all started for me) - Mossflower.
For those who don't know, Redwall is a series of children's fantasy books by Brian Jacques famous for its use of anthropomorphic animals, good vs evil, and regional British dialects. It was hugely popular when I was a young 'un (the first book was published in 1986, the year of my birth); I do not know how popular they are now, nearly ten years after Jacques' death and the posthumous publication of the last book in the series. I probably discovered them when I was around 10; I was still joyfully enjoying being able to take the latest release from my uncles' bookshop for free in my late teens.
Obviously I am no longer in my teens, but now I am going to read them all again and share my thoughts. I appreciated Redwall more for being older - will that be true of Mossflower?
Mini-Review: Before there was Redwall, there was Mossflower...
The good animals of Mossflower Forest suffer under the ever increasing tyranny of the Greeneyes family of wildcats, rulers of Kotir castle. The spirit of rebellion waxes thick, but they don't have the forces to take on a trained army. Into this comes Martin the Warrior, a mouse without purpose; a wanderer, a born fighter, making his way south from the homeland that chewed his family up. Captured by Kotir's forces, he makes a friend and a vow. The friend is Gonff, the irrepresible thief and jokester from Mossflower; the vow is that he will kill the wildcat Tsarmina after she breaks his father's sword.
Naturally, Martin becomes part of the Mossflower resistance. But with it being clear only a bloody defeat awaits the path of open confrontation, they come up with a new plan - Martin must quest for Salamandstron, legendary home of the badger lords, and bring home Boar the Fighter, Mossflower's most warlike son. But doing so only exchanges one set of perils for another, and Martin's destiny is calling.
What do I recall thinking at the time: I'm not a huge book cover guy but I think I need to share this one: 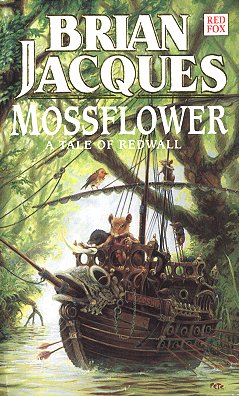 Email ThisBlogThis!Share to TwitterShare to FacebookShare to Pinterest
Older Posts Home
Subscribe to: Posts (Atom)
Welcome to my blog about Fantasy Literature. If you would like to talk about being reviewed or interviewed here, please contact me via the Contact Form or at https://twitter.com/PeatLong